NAIDOC Week runs from 3 to 10 July and celebrates the history, culture and achievements of Aboriginal and Torres Strait Islander peoples. This week, we acknowledge four of our talented Aboriginal students and boarders; Nathan, Leon and Jacob in Year 11 and Drew in Year 12, who have been working closely with Noongar / Yamatji artist Sasha Hill and Noongar SPSC staff member Ms Astrid Innes, to produce individual artworks that will feature as part of a special moving light display at our upcoming SPSC 175 Gala Ball on Saturday 6 August.

Learn more about our students and their backgrounds portrayed in their artwork below:

Drew Willie (Year 12)
Drew is an Arrente (Central Australia) youth who has grown up in Alice Springs.
Drew’s work reflects his life on country through dot painting. The artwork depicts a gathering place with his seven family members sitting at the top of the artwork and kangaroo tracks below to replicate their hunting and camping days together.
Drew spends much of his time on country walking the land which is shown as footsteps in the sand surrounded by desert and ochre colours.

Nathan Spry (Year 11)
Nathan is a Marranunggu (Daly region, Northern Territory) youth who has grown up in Darwin.
Nathan’s artwork crosses three layers of his country: land, sea and mangroves. He has used the Rarrk-style technique reflective of his country and the creatures’ spiritual meanings. The boab tree with mangrove roots hosts an eagle, which is one of Nathan’s totems, whilst spears line the sea waters where a barramundi is hunted. Nathan’s other totem, the goanna, is seen moving through the mangroves leaving its tracks in the red sand.

Leon Connop (Year 11)
Leon is a Garawa (Tiwi Islands) youth who has grown up in Darwin.
Leon’s artwork links his connection to country and sea with the vivid blues and greens of the mangroves. Leon uses Rarrk-style and Dot-style painting.
His artwork depicts his favourite hunting and fishing creatures – crabs, mud mussels, prunga (mud whelks) and fish amongst the mangroves and beach lines. The Pukumani Pole, replicated from his own totem pole, sits to the right of the artwork.

Jacob Foster (Year 11)
Jacob is an Arrente (Central Australia) / Noongar (Western Australia) youth who has grown up in Alice Springs.
Jacob is a passionate basketball player following his father’s footsteps, finding solace on the court, which is why it is the central piece of his artwork.
His six family members are shown in a gathering place around the ball reflecting his family’s support of his passions whilst keeping a connection to country. Waterholes with goannas highlight the beauty of life and country in the desert. Honey ants weave their way through the piece; a common bush food on country. The ants have swollen abdomens filled with honey ready for eating. The colours across this piece reflect those in the country that Jacob calls home, with ochre and earthy tones throughout. 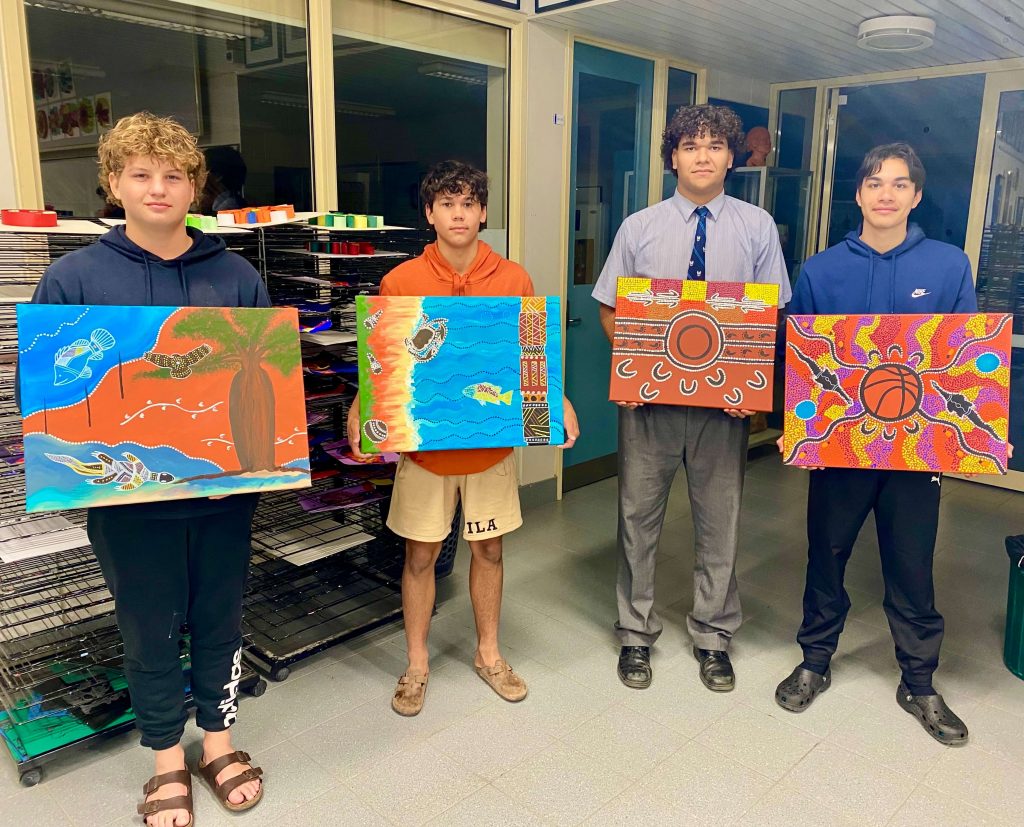 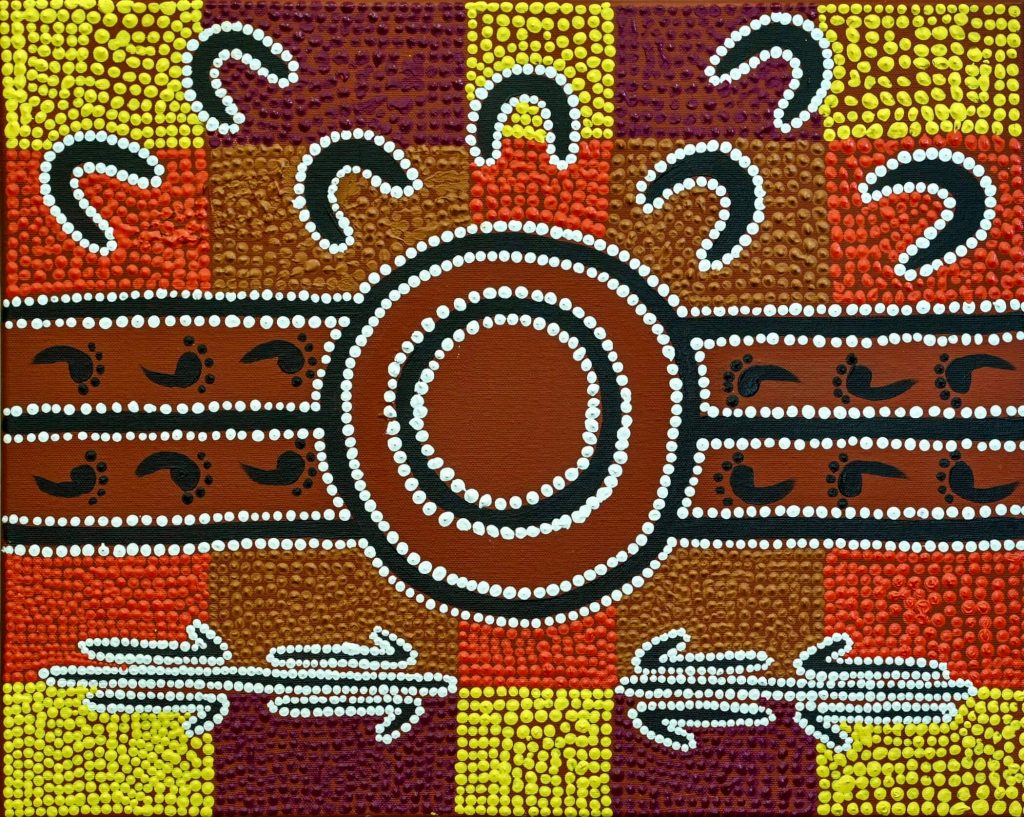 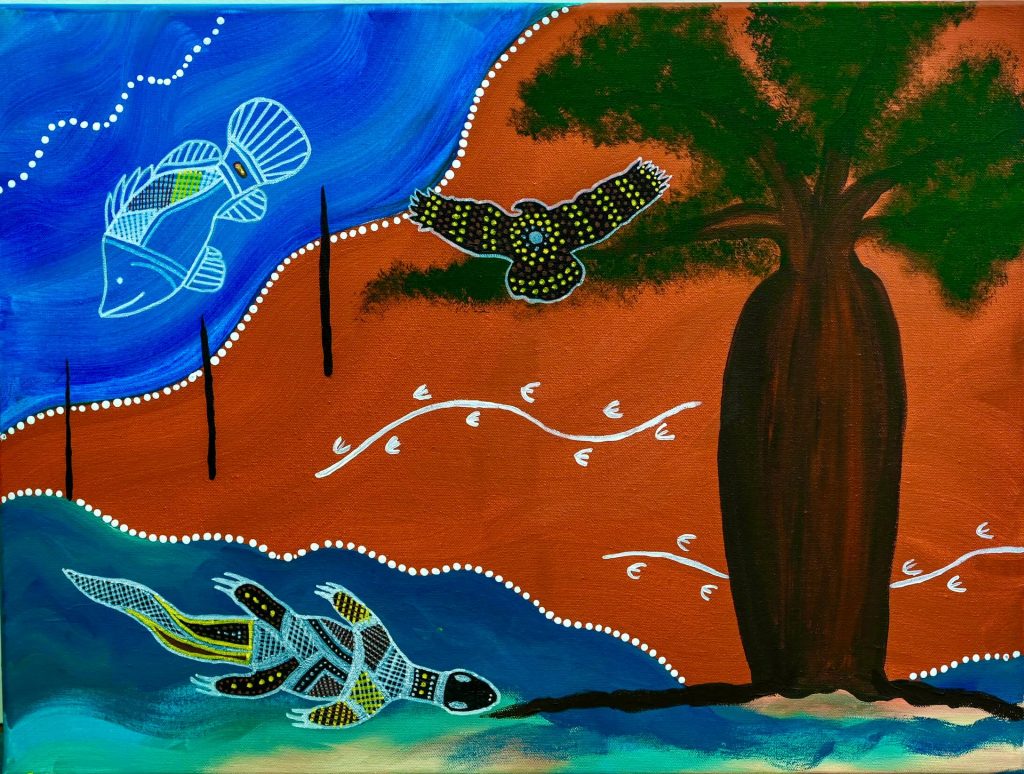 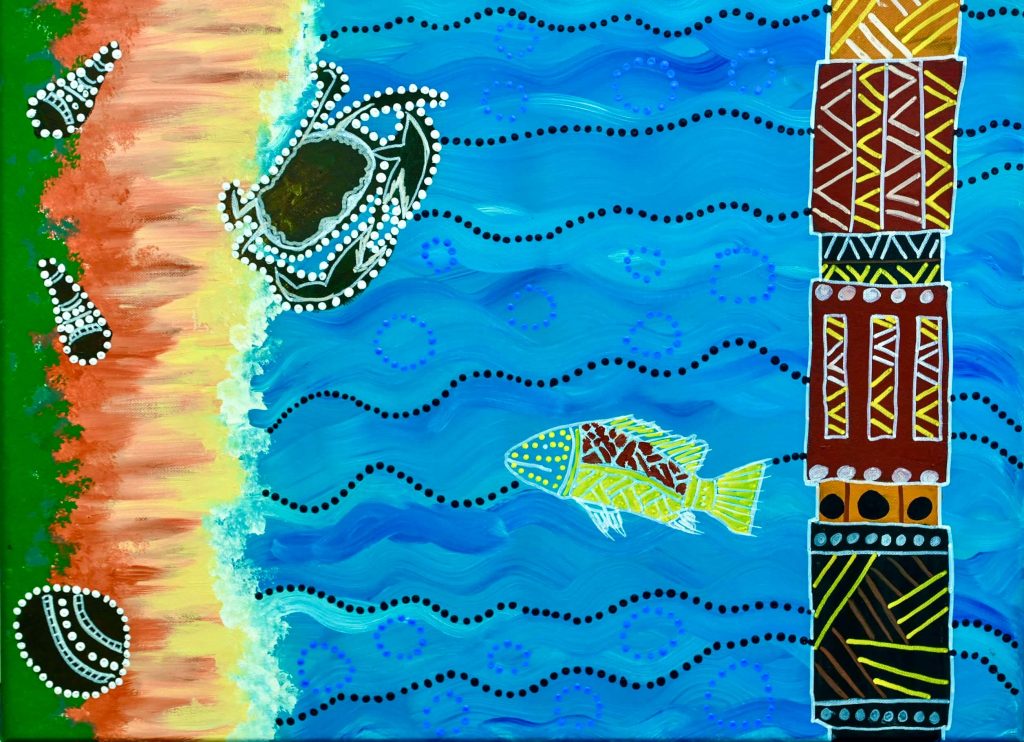 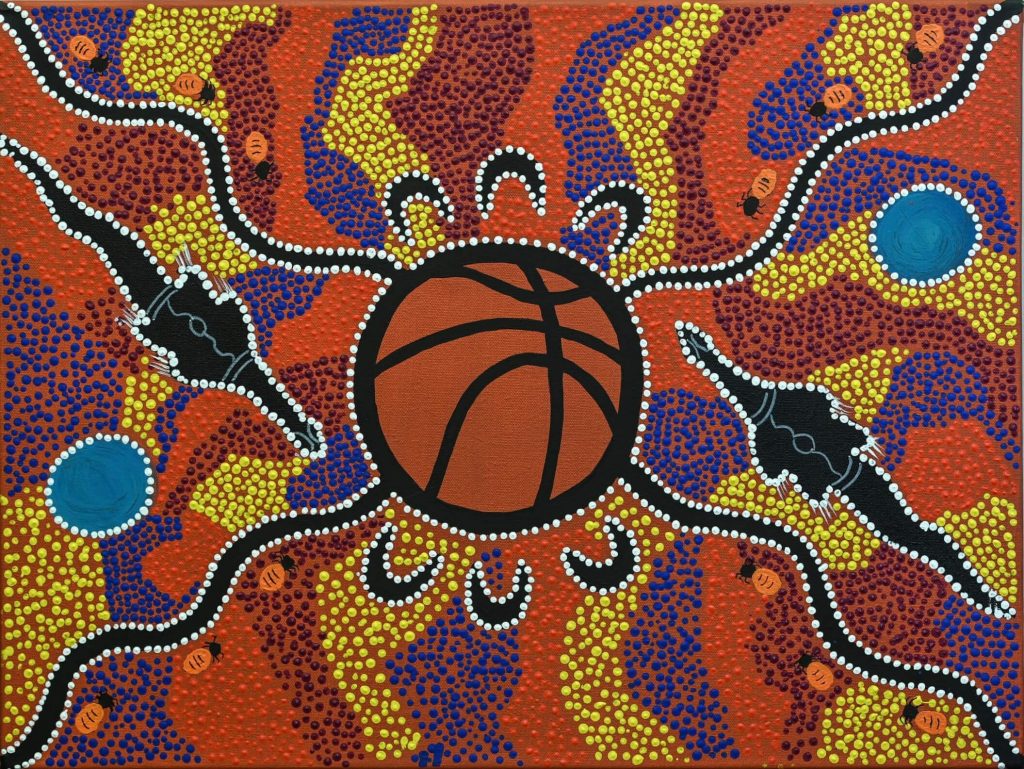 The School and House Prefects for 2023 were today commissioned at a special School Muster attended by their families....

Boys from Prep to Year 6 are welcome to join us between 3.00pm – 6.00pm on weekdays and throughout the school h...

Congratulations and best wishes to our students as they represent South Australian in national championships in their...