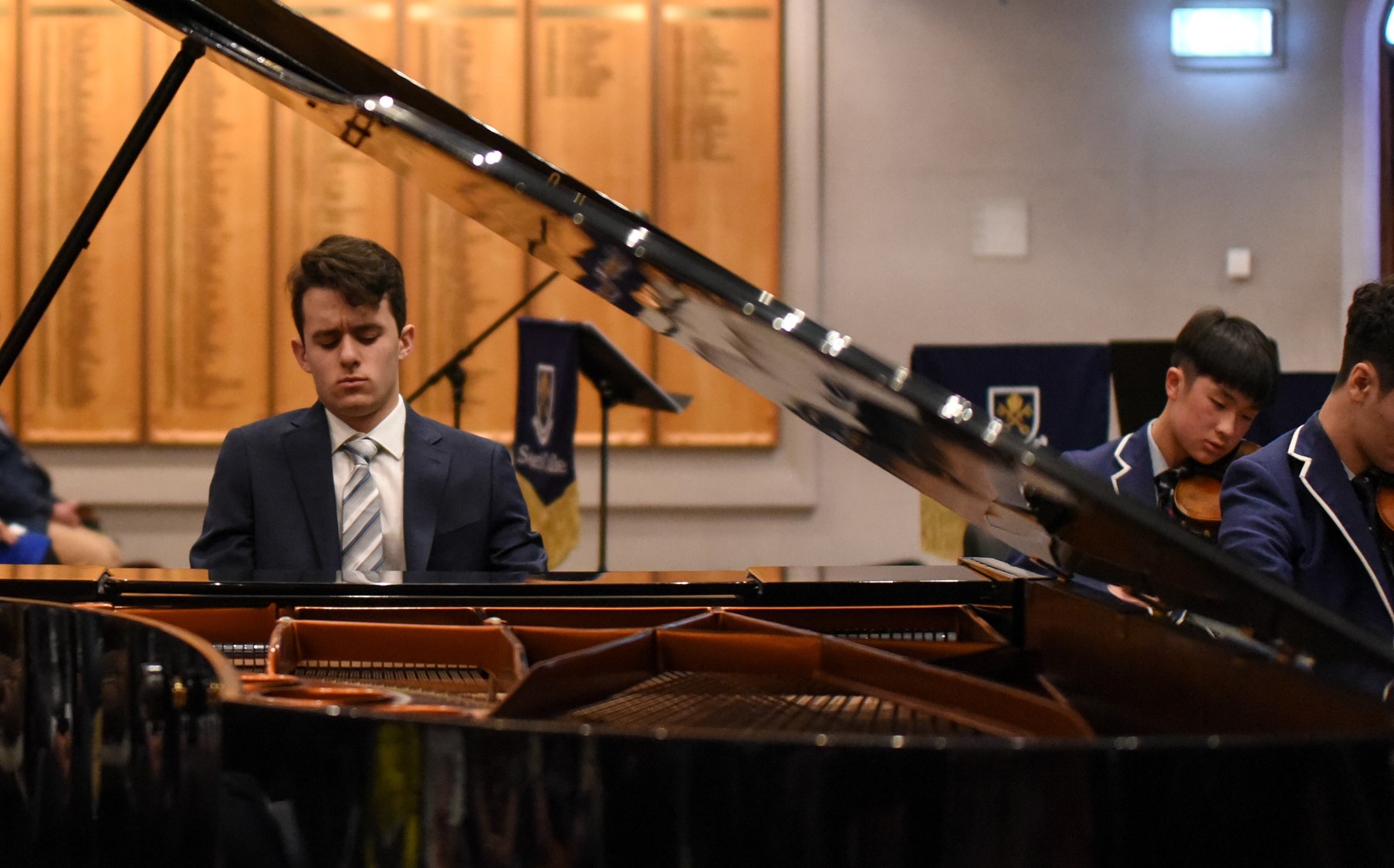 When the audience falls silent.

There have been some outstanding musical performances by students that are forever etched in my memory. Megan Jones of Hereford Cathedral School hitting top C in Allegri’s Miserere; Tom Houston of Bradfield College for his performance before his peers of his original song, Tell (now available on Spotify); and our own Nick Bowes (11:FLL) for his violin solo of Praeludium and Allegro by G. Pugnani-Kreisler at the 2021 Alfresco Concert.

I now add Alex Rouss (12:FRR) (pictured) to this list for his unforgettable performance of Grieg’s Piano Concerto in A Minor 1st Movement at last Saturday’s String and Orchestra Concert. Maybe I was affected more than others because I had a front row seat and could become as mesmerised by his technique as by the music itself. The fact is, there are no words to succinctly describe Alex Rouss’ solo recital in Memorial Hall on Saturday afternoon.

“Spectacular” might suggest something like metaphorical flashing rhinestones and strobe lights, but Alex’s performance, while expressive, had a more sombre and dramatic edge. Rouss teased out every single rhythmic texture the composer laid out for the orchestra, while flawlessly delivering all the notes with precision — at times so quick that his hands were a blur hovering over the keys of Memorial Hall’s extra-fine Bosendorfer concert grand.

“Deeply affecting” might fit better, but not in the sense of liberal use of rubato (speeding up and slowing down to mark the passage of phrases). Obvious expressive effects like these were remarkably restrained.

Instead, Rouss seduced his enthralled audience with impressive dynamic shifts, a technique so fluent and fluid as to defy mortal neurons, tendons and muscle, and pianissimo passages so delicate as to cause everyone to instinctively lean forward in their seat in order to better hear and attempt to see what was going on.

“Breathtaking” might work for Rouss’ interpretive high-wire act, in which he would linger during introspective passages to the point where the narrative thread threatened to break — but then would always pull back from the brink to keep the music flowing.

No matter. Rouss’ audience, myself included, was left rapt, slack-jawed and awestruck by a virtuoso display that will live on in memory for a long time because, all other descriptors aside, this young SPSC pianist told exciting stories through his musical performance that engaged everyone within earshot.

I have spoken before about the strength in the message when Memorial Hall falls silent. Moments when you know everyone is not just listening, but fully present and leaning in. When I spoke in last week’s Muster about Grace Tame’s visit to the school as part of the Rex J Lipman Fellowship, this was another such moment.

Whilst there could have been more blue and white blazers in the audience for her speech, I am confident that all of our students know who Grace Tame is and what she stands for. That she is the 2021 Australian of the Year, and that she is a survivor of sexual abuse. Maybe it was the detail that, at just 15 years of age, Grace Tame was groomed and raped by her 58-year-old teacher – in school, every day, for months – that made the boys lean in.

I encouraged the students to remain inspired by Ms Tame’s strength to speak out, and that every contribution from each one of us on this issue, can be, in her words, ‘a catalyst for positive change’. There is certainly a transferable lesson in this for all of us – staff, students and parents – about the importance of and invitation to speak up and speak out.

I wish you all a relaxing and reflective break.