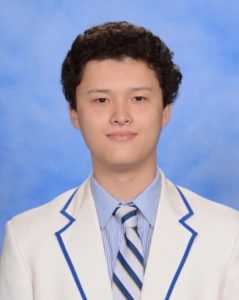 Matthew graduated from Saints in 2015 and was awarded the Robley Prize for the Proximae Accessit. He studied the International Baccalaureate and obtained a score of 43 (an ATAR of 99.95). He joined the School in 2002 in the Early Learning Centre and left St Peter’s College with many distinctions including School Prefect, the Order of Australia Association Student Citizenship Award, RR Stuckey Prize for Mathematics, German Prize and the Ella Roe Prize. Matthew played an active role at School and was a member of the Historical Society and Future Problem Solving and placed first in the world in the International Scenario Writing competition in 2015.

Matthew’s education at Saints provided the foundation for his studies at the Australian National University where he has been studying for a Bachelor of Philosophy (Honours) in physics and mathematics. We wish Matthew all the best as he embarks on this new journey.